Back to all posts

Tucked away on the far west side of an old Dallas office building is a spot where the Deering family helps bring music to life, through a space called Acoustic Kitchen Studios, fit for small live shows and recording sessions.

The studio itself is in stark contrast to its own exterior appearance. Acoustic Kitchen feels more like a cabin than anything else on the inside. Various cuts of wood line the walls, and awnings hang overhead with string lights connecting them. A grand piano sits next to a wall at the front of the room. Instruments (some on stands, some not) and effects pedals litter the floor, creating what a litigious mind would call a tripping hazard.

The place has seemingly always been decorated by this type of clutter. It used to house country music legend Charley Pride’s Cecca Sound Productions. Rachel Deering says that one day, Pride came to her husband Milo to have some tracks re-recorded for the Country Music Awards, and Pride offered the studio to him, so Milo took over the studio's rent.

Milo Deering has been recording and producing other artists for about 20 years. He's also a singer-songwriter and composer. While teaching private music lessons for 15 years, he taught a songwriter named Rachel, whom he later married. The Deering's daughter, Scarlett, is also a singer-songwriter and freelance musician. She and her dad do some of the studio's engineering together, but Acoustic Kitchen also has other in-house engineers.

During the studio’s first singer-songwriter showcase on May 27, Milo, Rachel and Scarlett greeted patrons as they walked in, almost as if welcoming guests into their own home. Music culture is minimal around the Royal Lane and Webb Chapel intersection where the studio sits, and the Deerings are trying to change that.

People began filling seats on the opposite side of the studio as the night neared 7 p.m. For most shows, the Deerings will put advance tickets up for sale online. However, for their singer-songwriter showcases, they ask guests to just pay what they can to support the artists, passing around a hat for contributions.

Rachel, acting as the host for the night, stepped up to introduce each of the five singer-songwriters. Each artist was allowed to play up to four songs. Between each one, they would explain the stories behind their music. Christine Hand, a former adjunct lecturer at Southern Methodist University, played the first song of the night, called “You’re Not Alone.”

“I’m an English professor. It’s a real exciting life,” Hand says sarcastically. “I’ll find myself on the other side of people who have run off or run away. I always wish that I could send this message out there to them that ‘I’m here for you. I’m still waiting for you to come home. I still love you, and you’re not alone in this.’”

Milo backed up her set with impromptu cello, violin and guitar accompaniment, along with Ed, Hand’s husband of 12 years, following along on percussion. It was a 15-minute taste of dynamic North Texas folk.

“Who’s the next victim?” Milo shouts, prompting the next performer to go up.

Next was a heavy-built man named John “Pops” Dennie, who played an honest, contemplative, sometimes funny set of songs. His voice was almost as thick as his big, gray-ish beard. Dennie's first song, “You Can’t Hear Me,” was about a friend of his, also named Ed, who was diagnosed with small-cell lung cancer.

His set was off to a somber start. However, his next song would have the audience laughing out loud, so much so that even Dennie appeared to chuckle as he sang. It was a song called “Up Digger,” about an hourly-wage-working grave digger, which subtly hints that the character started robbing graves to save up for a vacation. It's a song suited for a small place like Acoustic Kitchen, where patrons are deeply tuned into the music being played.

Dennie says he played the same song at a bar days before, where he received little to no response.

“Most people don’t listen in bars, so nobody got it,” he says.

KNON 89.3 DJ Nancy “Shaggy” Moore took the stage next with her mandolin player Royce James. Some of her honky-tonk set was a deep dive into North Texas' music past, referencing venues like Sons of Hermann Hall and Adair's Saloon, and the role they played in at least one of her romantic relationships.

One of the most impressive aspects of the night was Milo’s ability to hop up and accompany whoever was playing on nearly any instrument in the studio. Scarlett is similarly talented, which should come as no surprise as they both spent the last year touring with The Eagles. 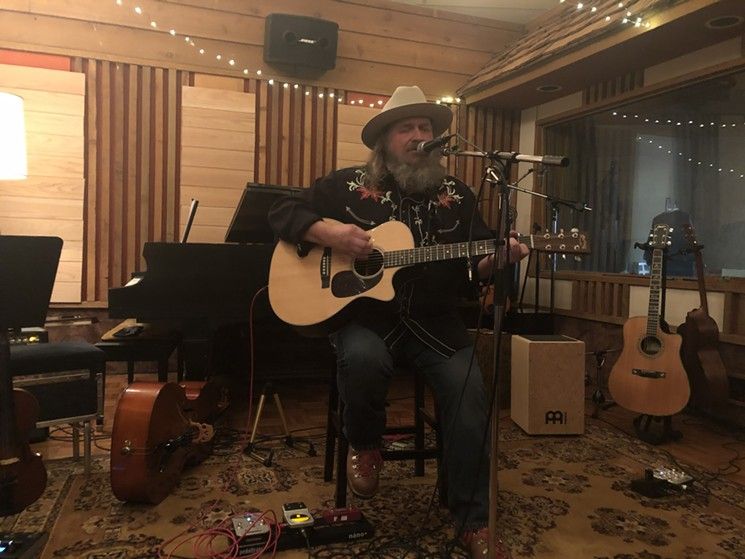 When the next act, Barton Stanley David, went up to play, Scarlett hopped right up to the front of the room with him. David had spent the last decade living in New York and has been trying to get his feet wet in the local music scene ever since returning. His normal soft, alt-rock sound was immediately transformed into folky when Scarlett began playing along with her violin.

Scarlett wrapped up the night with a set of her own backed by her dad. It was a master class in both performing and songwriting. One of the soft-spoken singer-songwriter’s tunes, “Eclipse,” seemed to encapsulate the vibe that night at Acoustic Kitchen.

“Some relationships are perfect for just a moment, just the way that every so often the moon and the sun align just perfectly to give us a beautiful eclipse,” she says. “Then, it just phases right back out.”

The lives of everyone at Acoustic Kitchen converged that night, and for a couple of hours it was perfect. However, eventually, Scarlett and Milo played the last notes of the night. People clapped, got up from their chairs and mingled around the studio for a short while. Then, one by one, they walked out of the studio, leaving the night behind. The next scheduled show at Acoustic Kitchen is set for June 15, which means there are many more still to come.